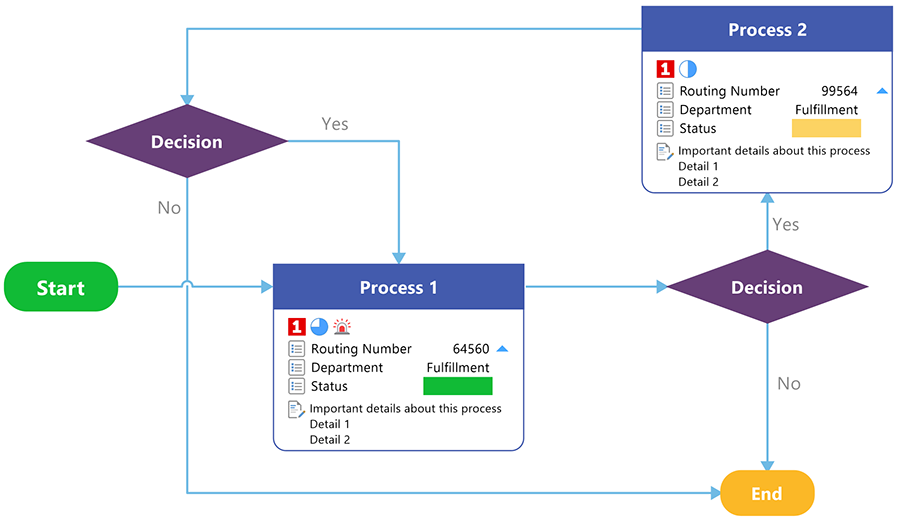 What is a flowchart?

Flowcharts are a visual representation of processes or workflows. Arrows connect ideas in workflows, showing the process's proper order or flow. Flowcharts create a visual reference for a process by clearly showing how each idea or step leads to the next.

Flowcharts can be simple or complex. For example, a simple one might have one set of ideas, one main path, and one endpoint. Complex flowcharts can have many ideas, multiple diverging paths, and several different endpoints.

These charts are popular for personal and professional projects, with uses across various industries and fields.

Decision flowcharts help you map out potential paths and outcomes related to a decision you have to make. Laying out the entire scenario and various consequences in a visual format can help you make a more informed decision. Decision flowcharts are often used in project planning, research, and product development.

Process flowcharts, also known as process flow diagrams (PFD), illustrate the sequential steps of a process or workflow. Process flowcharts are used in various industries and situations, but they are especially common in manufacturing and production applications.

Although you can create a simple flowchart with your choice of shapes and lines, the American National Standards Institute (ANSI) and the International Organization for Standardization (ISO) have set specific standards for flowchart symbols. We recommend following these standards to ensure everyone will be able to understand what your flowchart is trying to convey. Common flowchart symbols include:

When to use a flowchart

Flowcharts provide a way to visualize a process or workflow quickly. Some additional uses for flowcharts include:

In business, professionals use flowcharts for various tasks and projects, including: 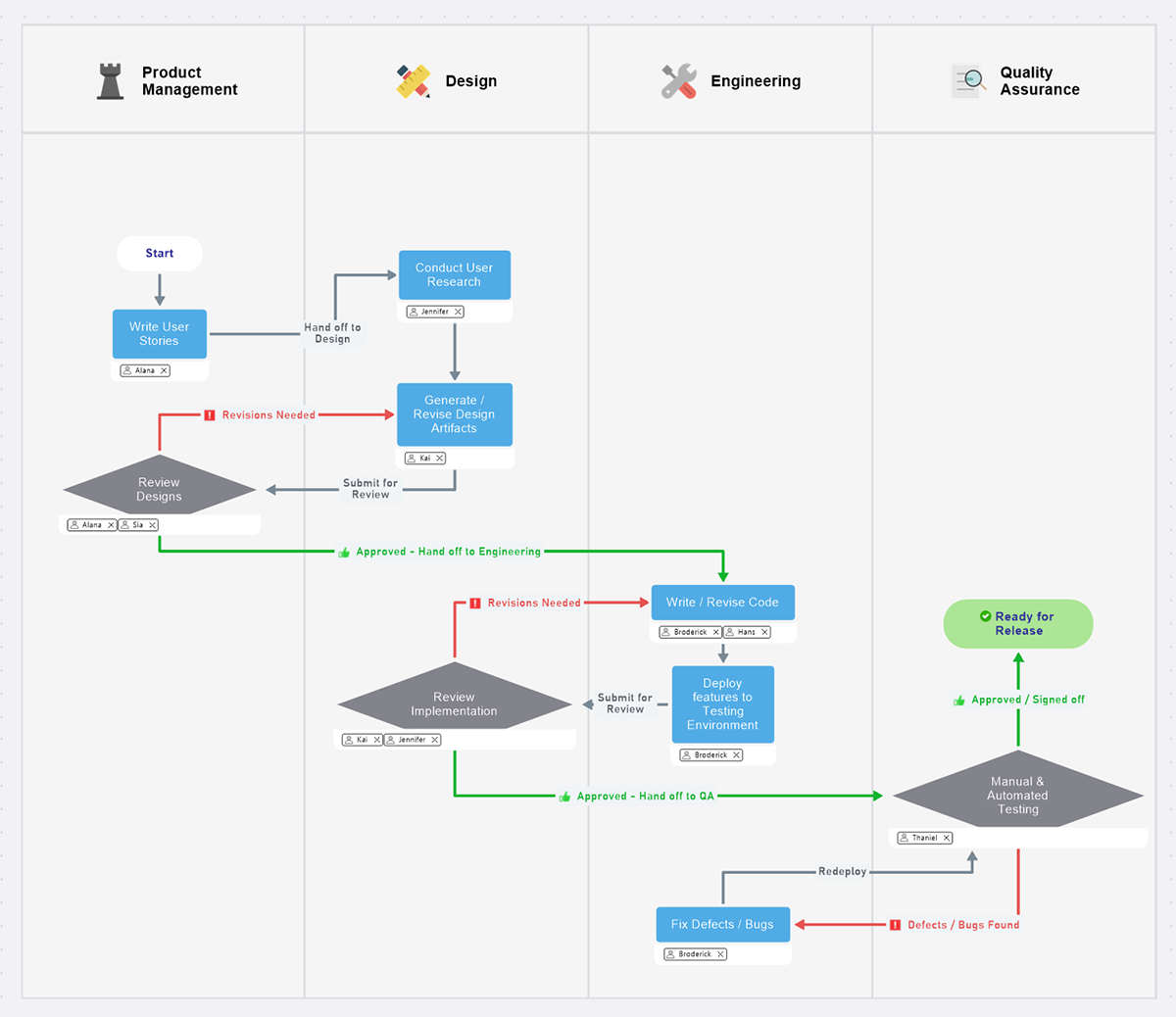 Flowcharts are sequential by nature making them beneficial for visualizing any multi-step process. The top advantages of using flowcharts include:

Use a flowchart to translate complex workflows into a simple, easy-to-understand visual format. A flowchart's layout and universal symbols make it ideal for stripping a process down to its most basic steps.

Flowcharts provide an excellent format for process and workflow documentation. By recording your operational processes in a flowchart, you'll be better equipped to implement and enforce standard processes across your organization.

Flowcharts facilitate collaboration and communication across teams. You can use flowcharts to compare different people's processes and ensure your team is on the same page about how to handle a particular task or project.

How to make a flowchart

Making a flowchart is easy. If you're ready to make your first flowchart, follow these steps: 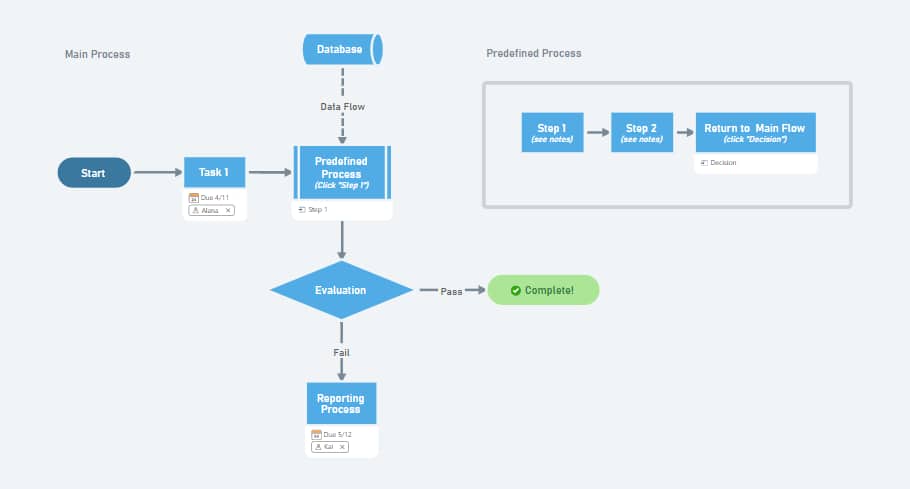 Why use MindManager to make flowcharts

You can make a flowchart by hand or in any graphic design program or use a program specifically designed for flowchart making. MindManager, an industry-leading flowchart maker software, allows you to create complex, detailed flowcharts with ease.

MindManager helps you synthesize ideas and information by providing a simple, intuitive framework for organizing your thoughts. With MindManager, you and your team can clarify complexity and collaborate in new and unexpected ways.

MindManager comes pre-installed with many flowchart templates. To use these templates: 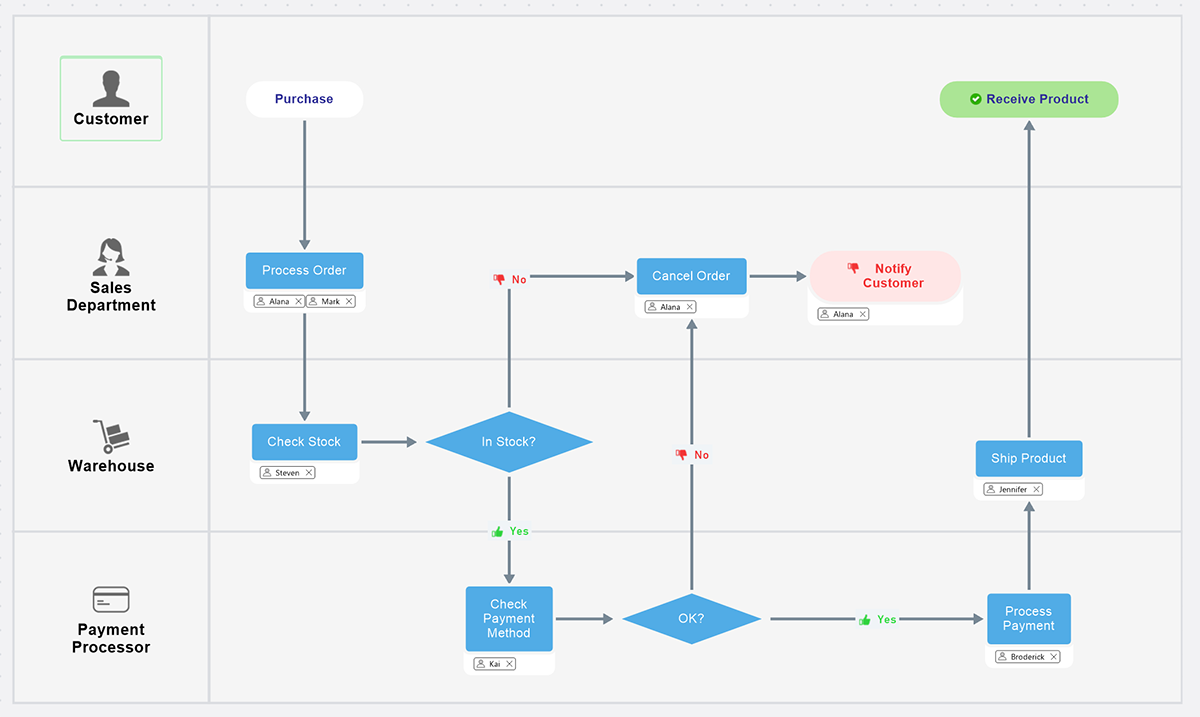 What are the different types of flowcharts?

The four main flowchart types include decision flowcharts, logic flowcharts, system flowcharts, and process flowcharts. Other flowcharts include swim lane diagrams, which show the steps of a process and who is responsible for each step, and PERT charts, which show how tasks are dependent on other tasks within a workflow.

What is the difference between a top-down and a horizontal flowchart?

A top-down flowchart gives you a visual depiction of the steps in a workflow or process by breaking down the requirements in sequential order, including substeps for each. Horizontal flowcharts are formatted from left to right and convey steps sequentially. Flowcharts can flow in any direction, so long as all steps or concepts are connected with arrows.

What symbols are used to make a flowchart?

The four main symbols in a flowchart are rounded rectangles (or ovals), rectangles, arrows, and diamonds. Each symbol has a specific meaning within the flow of steps in the flowchart.

Find your flow with MindManager

Creating flowcharts in MindManager is easy and intuitive. Simply choose a pre-made template and follow our steps for making a flowchart. To get started making your own flowcharts, try MindManager free for 30 days.

Your guide to making the most of project management flowcharts

How to create a business flowchart infographic

Flowchart diagrams: what they are and how to use them

Use flowcharts to document your work processes