What is a timeline chart?

Timeline charts are highly versatile visual charts that are used to illustrate a set of events chronologically. They're an excellent tool for conceptualizing event sequences or processes to gain insights into the nuances of a project. That could include summarizing historical events, or any other time frame where you need to measure minutes, hours, dates, or years.

There are many potential use cases for timeline charts. For example, history students can use them to highlight important events to help remember dates for an exam. Organizations can use them to break down complex projects into more manageable stints. Researchers can also use them to keep track of the time between experiments.

Although there are several different types of timeline charts available to choose from, all timeline charts follow a similar structure. They will all include dates and descriptions, and some will also include images and headers. 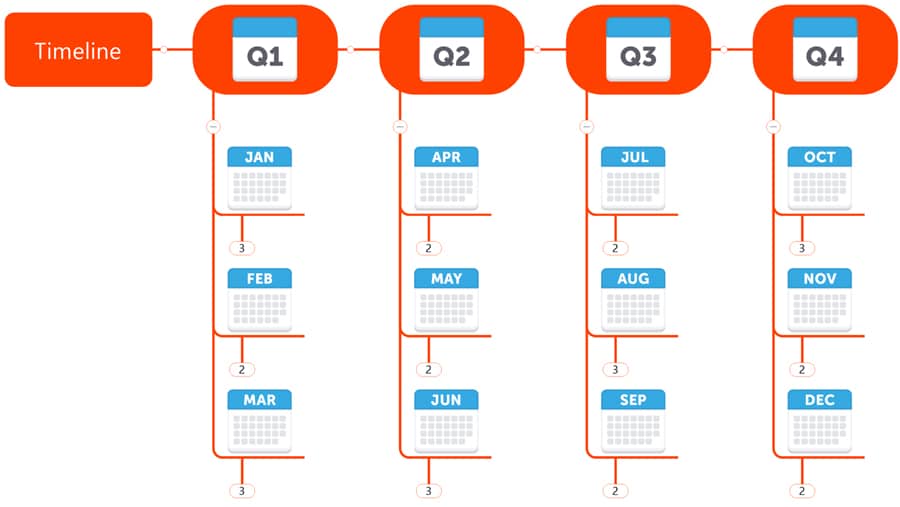 While all timeline charts contain the elements mentioned above, there are some notable differences among the types you can use. Here, you'll learn more about the variety of timeline charts you can choose from, what makes them unique, and projects that might be a good match for each:

Gantt charts are grid-based diagrams that break down projects across calendar days. They are typically used as a project management tool for large-scale development projects with multiple stages and a firm deadline. For example, Gantt charts are used widely in the construction industry, where plans are highly dependent on each other, and one part of the project can't start until another has ended. They are also used in industries such as event planning to create a dependency between different tasks. 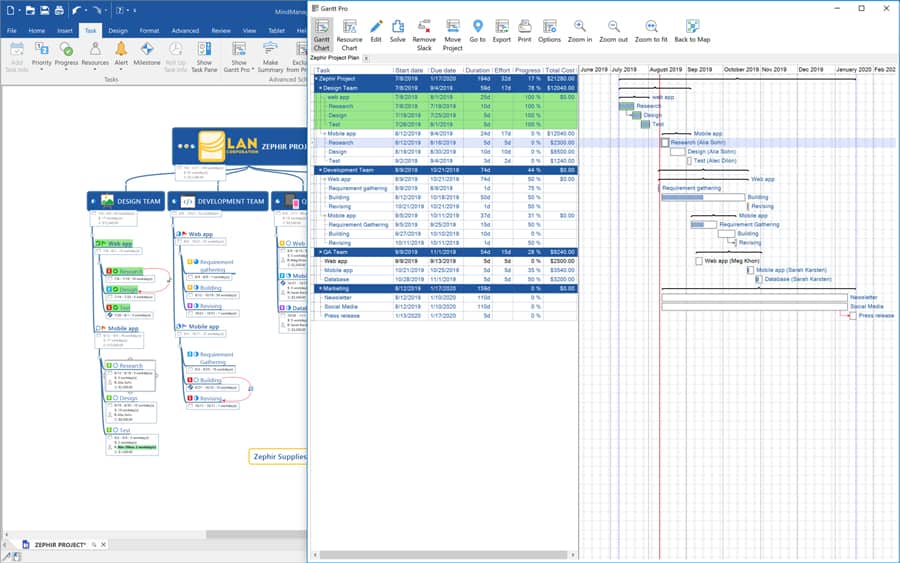 Unlike most timelines, which you can easily follow from left to right, a vertical timeline starts at the bottom and ends at the top. They are a popular way to show progress towards a specific goal. As you progress with a particular task or goal, the colored bars feature that progress. For example, fundraisers often use vertical bar chart timelines to show how much progress they have made towards raising a specific amount of money.

While static timelines just allow users to look at them, interactive timelines are more dynamic. They typically let users scroll through them, zoom in and out, and even change the data in real-time to display different results. Static timelines are much easier to create and are good when you have a small, concise amount of data.

While dynamic timelines typically require more effort to create, they are an excellent way to display significant amounts of data. For example, a software organization might use a dynamic timeline to visualize critical metrics, coordinate tasks, set deadlines, and identify potential delays.

When should I use a timeline chart?

Here are some examples of when to use a timeline chart:

Educators often use timeline charts to give students an overview of the details of an event. That information helps them visualize how a series of individual events combine to lead to a larger event.

Project managers use timeline charts to mark out the journey of a product, starting with the initial idea stage and ending at the launch stage. Even though each product will follow a slightly different timeline, the overall structure is generally the same, making timeline charts a good fit.

These charts are an excellent tool when project managers need to oversee their team's workload and understand a specific project's progress.

Using timeline charts for event planning allows you to create a visual schedule of your event. This means that you can easily see exactly what is happening and when, and helps to make sure that things run smoothly on the day.

Timeline charts are a simple way of providing a clear overview of what needs to be done and when – which can help you manage complex tasks and ensure they're completed on time. Some of the benefits of using timeline charts include:

The linear layout of a timeline chart allows you to visualize a process or series of events that took place over a specific timeframe, making it easier to allocate resources at the right time. This means it can be a good decision-making aid for current and future projects.

How to make a timeline chart

Why use MindManager to make timeline charts?

With a few clicks and some essential information, MindManager generates a timeline chart that you can use to assign tasks, define the parameters of a project, or better understand a process.

Some of the key benefits of using MindManager's timeline software to make your timeline charts include:

MindManager comes pre-installed with many templates. To use these templates: 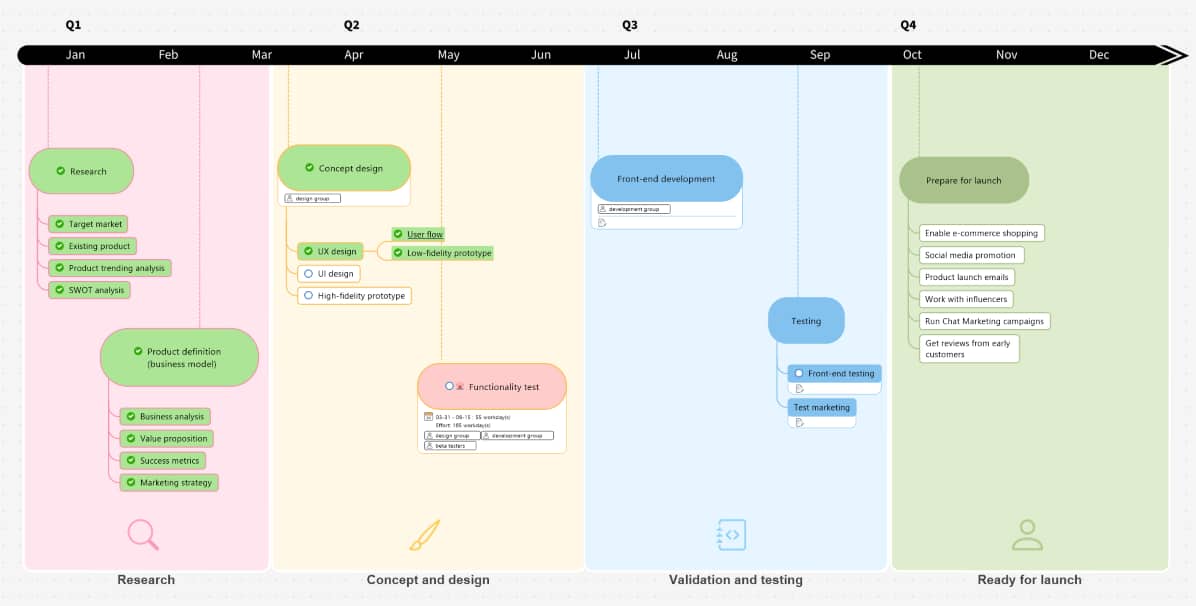 What are the components of a timeline?

There are four key components of a timeline. Dates and descriptions are the main parts of every timeline, while headers and images used to display additional information are optional.

How do you decide which type of timeline to use?

Deciding which type of timeline to use depends on many factors, such as what kind of information you'd like to display and how much data you have to display.

For example, if you're trying to schedule multiple events that are dependent on each other, then you might choose a Gantt chart. If you're plotting out the key dates of a historical event, you should use a chronological timeline.

A timeline chart is a valuable tool for organizations that need a concise way to visualize a process or event chronologically. They're quick to set up, and you can easily customize and share them with others once you finish. There is a wide range of timeline charts available to choose from to suit your needs.